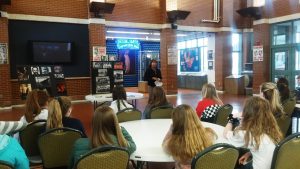 Hello everyone!
Yes, I know it’s been a while, but hey y’all…I’ve been busy, busy, BUSY! I have flown to New Orleans (granted, this happened a few months before the debut, but it still counts!), I’ve visited Nashville, Tennessee, Knoxville, Tennessee and even Franklin Tennessee, the place where William “Bill” Lewis of HAMMERING FOR FREEDOM was born. Everywhere I’ve visited, people have been super-interested in the subject matter, and accommodating in every way. 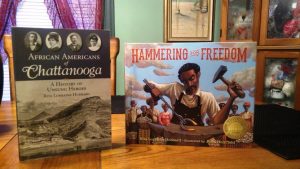 In the top image, I am chatting with a group of girls from GPS (Girls Preparatory School). Even though my mission was to chat with them about HAMMERING FOR FREEDOM, I also took AFRICAN AMERICANS OF CHATTANOOGA, my first book, along for the ride. I did this because I wanted the girls to understand that Bill Lewis of HAMMERING FOR FREEDOM was NOT an isolated story. There are MANY stories of outstanding and even amazing African Americans who lived right in Chattanooga who made an impact on the city, the state, the region… and even the country! 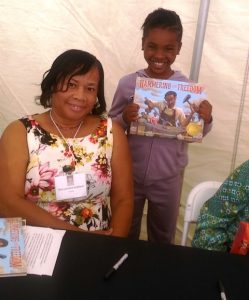 In this image, I am in Nashville (Sept 2018) with a young fan who wanted to take a photo with me. My trip to the Nashville for the Southern Festival of books was an exciting one. I’ve been to Nashville a few times, but it has really “metropolized” (that’s one of my words; indulge me, lol) since the last time I visited. The construction was mind-boggling and the traffic was the stuff of nightmares, but once we found our way to the Nashville Public Library, everything fell into place. The Festival stretched for blocks past the library. It was so full of people reading, flipping through pages, and booth-hopping that it made me look forward to my next book conference.

As a somewhat comical footnote (I say “somewhat” because it wasn’t funny at the time), if you ever visit the Nashville Public Library you may want to do so on a weekday when there are humans in the parking garage. The Festival happened on a Saturday, and I had no problem finding a parking space in the garage when I arrived. Just breezed right in there! But when it was time to leave, it took me 30 minutes (literally) to find an exit. There were Exit signs all over the place, but they had NO ARROWS and people drove around in circles so long that a few got road rage (or should that be library rage?) and began to honk and swear at each other. When a caravan of us finally found an exit, it was closed and we were told by a passer-by to “drive THAT way” to find the exit on the other side of the garage. Then he said, “They don’t call this garage The Maze for nothing.” A city worker in a small tractor happened to be in the garage and guided us all out. When we got to the second exit, we were all charged $10 for parking, even though we had all had our parking validated. The attendant said it was because the validation was over 30 minutes old — which wouldn’t have happened if we could have found our way out!!! 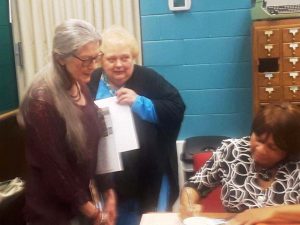 Anyway, here I am (on February 17, 2019) at the Franklin Historical Society and Library, signing books for the wonderful people of Franklin County. My event happened on a Sunday, it was pouring sheets of rain, and Franklin County is near Nashville so we were in the higher elevations and surrounded by fog, mist and somber gray clouds. And yet, a very LARGE group of die-hard book/history/library lovers showed up anyway. They were SO kind. They prepared coffee for my son, who traveled with me, and hot chocolate for me. They showed us around the library, chatted about their future plans, and were super attentive as I spoke. One Board Member offered to have us follow him when the chat was over so I could see the place where Bill was born. Another couple owned a smoke house and restaurant and wanted to offer HAMMERING FOR FREEDOM in their souvenir area. They invited me to visit also.

I couldn’t take them up on these field trips because it was getting dark fast up in those mountains, but I had such a wonderful time, I have every intention of visiting again this summer.

So that’s what I’ve been doing, y’all. Back to the grindstone. Chat soon!
Rita L