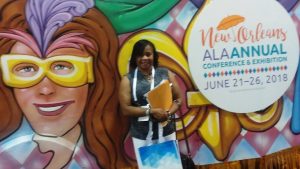 Hello Everyone,
Breezing by to tell you all about my adventures at NOLA. That’s the New Orleans Library Association Convention for those of you who don’t know!

So I’m writing this post late in the year…but that’s only because I’ve been super busy. There may be gaps in my story about the evolution of my Lee and Low debut picture book, HAMMERING FOR FREEDOM, but I figure better late than never. So here goes: 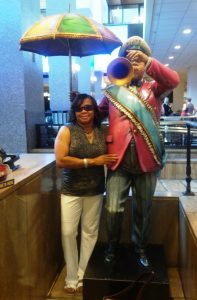 Rita Lorraine arriving at the hotel in New Orleans.

I had just finished celebrating my birthday on June 17 when I received a call from Lee and Low’s publicist. She told me that the publisher wanted to fly me to NOLA so that I could “eat dinner with some people,” and do a meet and greet. I was thrilled. I was to fly out on June 22 and return on June 24.

Before I could even get to New Orleans, I got the fabulous news that my book had been chosen as a JLG recipient. For those that don’t know, this means it was chosen as a Junior Library Guild selection. I was still reeling with this news when I arrived in New Orleans. There I met some WONDERFUL people, including Jason Low, co-owner of Lee and Low Books, and Cheryl Klein, Senior Editor. Their generosity was (and IS) simply amazing.

I also got to meet librarians from New York, Guatemala and Texas, and various award committee members from all across the United States. I had an absolutely wonderful time! I also saw my book on the bookshelves for the very first time and I was completely blown away! 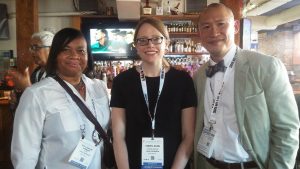 Well, that’s all for now! Next time I’ll post some pictures of the book conference and share my Kirkus reviews!