BREAKING NEWS
Home Uncategorized The UN-Editorial Notepad #17 – Once is Not Enough!

The UN-Editorial Notepad #17 – Once is Not Enough!

Posted By: Rita Lorraineon: February 23, 2015In: UncategorizedTags: aspiring writers, how to become a writer, how to writing, Rita's StuffNo Comments
Print Email 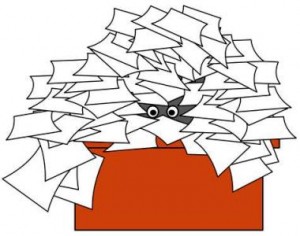 Hi Everybody,
Hope you’re well and warm. We’re still freezing here in the southeast! Just breezing through with another UN-editorial observation: Once is not enough!

In case you haven’t figured it out yet, the “once” I’m referring to has to do with editing. Once is not enough people, no matter what kind of hurry you’re in.

Over the last few months, I’ve worked with aspiring writers who were in a hurry to get their work out there. Many had not actually edited their work; they had simply left the job to the “spell checker.” Others believed that all they needed was for me (or someone else who was traditionally published) to give the work the once-over and it would be ready for publication. And still others admitted that it was probably in their best interest to get down to some serious editing before they sent their work out into the world. They just didn’t know what “serious editing” really meant.

Let me try to explain.

For me, editing is even more difficult than actually writing the book. I first edit by making changes as I read the manuscript on the computer screen. Then I print the manuscript and edit manually, only to discover several thousand problems I didn’t notice while I was reading it on computer. Then I correct those problems via computer and re-read on the computer screen. Then I print it out once more, fix the new problems I find (because there are always new problems!), then send the work to my critique group for editing. When they’re done, I read their comments and if their suggestions are feasible, I incorporate them into the manuscript. Then I re-print, re-edit, fix what I’ve edited, then print it out again and edit manually.

And that’s only the beginning, people! I put the manuscript away for two or three weeks (if I can stand it) then re-read it, repair it, re-print it and edit again. By then it’s time to send it back to the critique group.

This, as you can see, is more than “once”. But the question is, Is it enough? I’m not sure! All I know is, each time I edit, I find something else that should have been axed a long time ago.

Anyway, while I was thinking about this post, I stumbled upon an amazing article by author K.M. Weiland called How I Self-Edit My Novels: 15 Steps From First Draft to Publication. Why is it amazing? Because she edits so much, she does it “until the cows come home!”