BREAKING NEWS
Home Uncategorized What Makes You Want to Lie to Me?

What Makes You Want to Lie to Me? 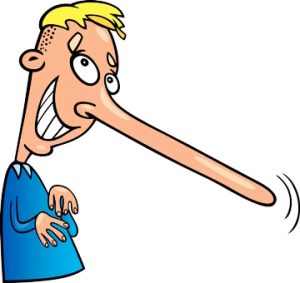 Hi Everybody,
I so wanted to write something more positive, but unfortunately I need to rant instead of celebrate. What makes people want to tell lies? And what in heaven (or hell) makes them think they won’t get caught?

So I placed a “not accepting new reviews” notice on my book review site, because frankly, I’m swamped. I just need a few weeks to rest my mind and eyes, and allow a few stir-fried brain cells to rejuvenate.

Almost everyone has respected the sign–except one clever man who could care less about my eyes or my brain cells.

That man took it upon himself to fire off a casual,“we-know-each-other-so-I-can-talk-to-you-this-way”email stating that his latest picture book should have arrived on my doorstep days ago, and why in the world hadn’t I emailed to let him know I got it.

He informed me that he had personally seen to it that I got a copy of his second picture book hot off the press because I had done such a wonderful job reviewing his first picture book back in 2012.

Now, I’m the first to admit I don’t have a perfect memory, but I do know what I have and haven’t reviewed. I never reviewed his first picture book, and I never agreed to review his second. Why he was casually writing me about some phantom agreement is beyond me, because he knew &(%@ well that conversation never happened.

Just to be sure, I ran a search and found where he had indeed requested a review for his first book in mid-2012 (I was accepting reviews back then), but never sent the book or followed up afterwards.

Yet he was pretending that I had not only enjoyed reading his first book, I had given him a great review. And he was trying to make me believe that I would naturally enjoy his second book because I had so enjoyed the first.

If you’re still in the dark, here it is: He lied. He thought I would be too busy to remember whether I reviewed his first book, and he felt that since I wouldn’t remember, my embarrassment would compel me to review his second.

Well, I wrote back and told him he was mistaken, because I would know if I had written a review or not. But I gave him the benefit of the doubt and asked him to email a copy of this raving review I supposedly gave him so I could refresh my memory.

I haven’t heard from him. He seems to have gone the way of the dinosaur and disappeared from the horizon, leaving nothing but digital footprints in the sand.

And so, my rant for today is, What makes you want to lie to me???

I leave you with this soulful oldie that is quite fitting for such an untruthful occasion. It’s by a group called Merge, and is called: What Makes You Want to Lie to Me?