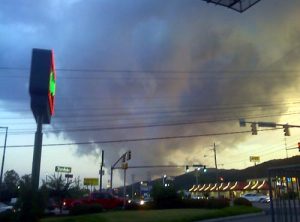 This is how it looked early that morning.

Okay, maybe not fire, but definitely rain, and some other pretty astonishing things, too: Falling trees, whirling debris, horizontal shrubbery. You name it, I saw it, and I’ll never forget.

I live in Chattanooga, the city struck by five tornadoes back-to-back on April 27, 2011. I woke up late, and although my dogs usually howl like coyotes if I wake up a minute past 7:30am, they were quiet and still that morning. That was the first sign that something was wrong.

The second sign came in the form of utter blackness outside my window. The third was the curious tapping sound on my roof and windows. Hail…and lots of it! The funny thing was, I hadn’t watched the news or listened to the radio the night before, so I had no clue we were in the middle of a tornado watch. Hey, I didn’t even know it was supposed to rain!

I let my dogs out of their crates, headed to the front door and stepped outside without thinking. What I saw gave me a start. My crepe myrtle tree was unraveling like loose thread from a wooly sweater. Weird objects whizzed past me, and hard, thin drops of rain began to fall so fast and furious, the world turned white and visibility dropped to zero. Then I heard a snap, and I saw a tree fall over, tearing the front of my next-door neighbor’s house away as it did. 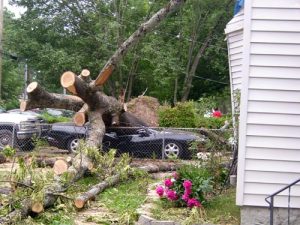 I saw the tree fall!

I took this photo (left) today, as workers cleared away the last of the destruction. Note how my neighbor’s house juts out in one spot. That’s where the tree took a battering from the tornado and was finally uprooted from the ground and tossed over against the house. When it first happened, the branches stretched all the way across the yard to my fence, blocking my poor neighbor’s front door and preventing any quick escape if things got worse.

After the tree fell, I heard the blare of a car alarm, but at the time I couldn’t tell where the sound was coming from. Now I know! The trunk of the falling tree crashed into another neighbor’s car and smashed it to smitherines. But at the time it happened, I couldn’t see through the branches. I only knew that this was no typical Chattanooga thunderstorm (we’re famous for those), but something more, and I hurried inside. Then I stood for a few moments, listening to unknown objects hitting my roof and windows. The lights went off and on a couple of times, then went out for good. And just like that, the storm was over.

But another one was hot on its heels, so I rushed to my mom’s house to check on her before the second one hit. Her lights had gone off but came back on briefly, and we watched the weather channel and saw three tornadoes whirling on the Doppler radar.

And then four. And then eight!

The radar kept changing, with tornadoes whirling separately at times, and at other times stacking on top of each other as they whirled about. It was the weirdest thing. I won’t take you through the blow-by-blow of each of the five tornadoes we did experience, but I will tell you that by the time the last tornado ground what was left of Chattanooga under its heel, the lights were out all over the city. My yard was full of insulation (not mine!), branches, paper, and curiously, big chunks of plastic I never could identify. I also found shingles all over my yard, and although I couldn’t tell from a glance that any of my own shingles came off, I couldn’t deny that what I found bore the unique color of black with sprinkles of sparkly red that my shingles have.

I slept in the dark that night. There was no moon, no stars, no street lights…nothing. The next day we were still without lights, so my sister and I scouted for food for our mother. Our usually bustling city looked like a ghost town in a way; I mean, there were plenty of cars on the streets as people searched for gasoline or food, but all the stores, gas stations and restaurants were dark inside, and had little “We’re Closed” signs hastily taped on the windows.

Once we figured out we weren’t getting our lights back on anytime soon, we decided to hunt for ice. Unfortunately, everyone in the city had the same bright idea, and at the very same time. Every single ice bin we found was empty. When we did find a stand-alone ice store that had ice, the line of customers waiting their turn was enough to make our jaws drop. And just the same way people pick the store shelves clean when it snows, those fortunate enough to be at the front of the ice line bought two, three, four bags of ice at a time, mindless of the people behind them!

Yes, it was an amazing time last week. I had made up my mind early on that I wouldn’t complain no matter what, I would just be happy that things were as well as they were. Boy, am I glad I had that attitude, because word quickly began to spread that some had died in the storms; some had lost part or all of them homes, and some had been severely injured. One postal clerk told me she went into her yard after the storm and found insulation, debris, and a check dated several years earlier. The check was from a home in Ringgold, Georgia…but the clerk lives in Soddy Daisy!

My thoughts and prayers are with everyone who suffered through this storm, no matter how briefly or how minor. It was a terrible time, but we made it. We survived the fire and rain.