BREAKING NEWS
Home Uncategorized Yep, They Were “Doing it” in Chattanooga!

Yep, They Were “Doing it” in Chattanooga! 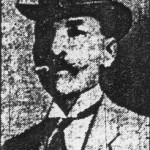 Hi Everybody,
As you know, I’m actively promoting my book, African Americans of Chattanooga this month and every month. It holds a treasure of “unsung” historical information, and I just want to share some of it with you.

Yeah, they were really “doing it” in Chattanooga. This is the late Mr. John G. Higgins, a prominent barber of the late 1890’s, and owner of the O.K. Shaving Parlor. 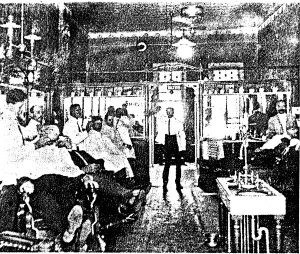 Higgins was the inventor of the Eureka Straightening Comb, a wildly successful item in those days before “permanents” and “relaxers” became widely known. The Eureka was guaranteed to “straighten the hair of colored people.” It brought Higgins so much money and fame, he was often badgered to sell his company.

But Higgins didn’t just dabble with straightening hair–he believed in cutting it off, too! The photo to the left shows the interior of one of Higgins’ best-known barber shops, the O.K. Shaving Parlor. It was located at 911 Market Street, Chattanooga, TN 37401. In 1904, this shop was considered one of the most beautiful in the city, and was frequented by some of the city’s finest citizens–black and white.

Higgins was certainly a progressive man. He came to Chattanooga in 1886 and worked at the barber trade for over 30 years. Aside from his straightening comb empire, he owned and controlled eleven other barber shops (Tonsorial Parlors). Now that’s what I call doing it.

Be sure to pick up your copy of African Americans of Chattanooga and find out who else was doing it.