Super Heroes Among Us 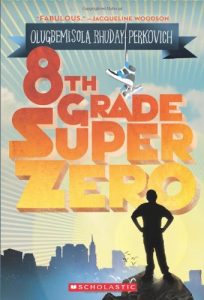 Hi Everybody,
Back with another review of another grrrreat book for teens and pre’s. This one is called 8th Grade Super Zero, and it is written by debut author, Olugbemisola Rhuday-Perkovich. Doesn’t that name just sing?

So come along and let me tell you about the super-heroes among us.

If you’re like most people, you probably had a hard time in middle school. And although it would be a dream-come-true to go back and correct the bad things that happened to you in those geeky days, let me tell you…it ain’t gonna happen. So, like the rest of us, you’ll have to do the next best thing: Just pick up a copy of 8th Grade Super Zero, and root for a “pukey” underdog whose hard times makes yours pale in comparison.

8th Grade Super Zero, by debut author Olugbemisola Rhuday-Perkovich, is the story of Reggie “Pukey” McKnight, an eight grader who lives a mostly forgettable existence–if you don’t count the time he puked all over the stage on the first day of school. His puke performance makes him the joke of his classmates; no one lets him live it down, especially his friend-turned-enemy Donovan Greene, who constantly calls him out in front of everyone.

Eighth grade looks mighty bleak for Reggie, until he becomes “big buddy” to Charlie, a snot-nosed little first grader who thinks the sun and moon revolve around Reggie. Then things change even more; Reggie gets involved in a homeless shelter project and finds himself focusing more on solving other people’s problems instead of his own. He gets so involved, he inspires other students to help, and before long, they are looking to him for approval and direction. To Reggie’s amazement, he is no longer such a zero; he’s making a difference in the shelter, and if he puts his mind to it, he just might make a difference at school, too…

8th Grade Super Zero is just a wonderful book. The writing is strong, the pacing is perfect, and I love that it doesn’t serve up the “perfect ending” as so many other books do; in fact, it offers no ready answers to life’s deepest questions, and “Pukey”–er, Reggie, is often on his own to figure out why life is the way it is.

Rhuday-Perkovich’s characters are funny, sad and multi-dimensional, and you’ll find yourself rooting for every one of them: The incredibly talented Reggie McKnight; his best friend, Joe C.; the political fireball (and possible first crush), Ruthie; and that runny-nosed little pistol, Charlie, who’s convinced that Reggie is a superhero in disguise.

I receive many free books for review, but in this case, the publisher didn’t have to solicit me for a review, I solicited them. This one gets my coveted, rarely-served FIVE STAR approval.