Hi Everybody,
Just being a H.I.R. (Historical Investigative Reporter) and shedding light on a little bit of history. Today’s lesson: It’s Raining Cats and Dogs. But–er…WHY??? 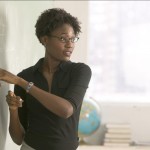 I know you’ve heard the saying, but have you ever wondered if the person who first exclaimed, “It’s raining cats and dogs!” was drunk or hallucinating at the time?

Well, wonder no more. That person might have been as drunk as a sailor, but that wasn’t why s/he said what what s/he said. After a bit of historical investigative reporting, I found out where that saying comes from.

Seems that long ago, houses were made differently than they are today. The roof of each house was made of thatch–a thick clump of straw piled high, with no wood underneath it. These thatched roofs provided the only place for poor animals to get warm (the A.S.P.C.A. apparently wasn’t in existence yet). So all the cats, dogs, mice and even bugs, snuggled into the inviting straw and used it as warm bedding. 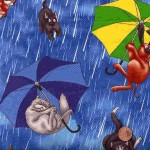 This was a fine arrangement–until it rained. Once the rain started, the straw became extra slippery, and since there was no wood underneath, there was nothing to help the animals keep their footing.If the rain kept pouring and it became too wet, the animals started slip-sliding away…right off the roof.

Can you imagine what it must have been like for the people from the early days, gazing through their windows and watching dogs and cats fall here and there as the rain came down?

I hope you’ve enjoyed this little bit of history as much as I have.