Eighth Grade Has Never Been So Funny 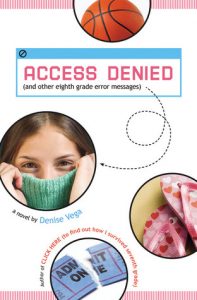 Hi Everybody,
Every now and then I post book reviews of books that I have particularly enjoyed. Here’s one by author Denise Vega, called Access Denied (and Other Eighth Grade Error Messages). Enjoy!

First things first. YES, I received a free copy of this book to review, but believe me, that didn’t influence my opinion. This is really a great book.

So without further ado, here’s my review of: Access Denied (and Other Eighth Grade Error Messages).

I have to admit, for me, Access Denied started out at a crawl. I had a world of trouble understanding who was who, who liked who, what was what, and what in the world had happened to the main character, Erin Swift, during the Year of Humiliating Events (YOHE).

I soon realized, though, that there was nothing at all wrong with this book. Once I got the background story behind me, Denise Vega’s knee-slapping sense of humor and delightful story-telling abilities cast their magic spell on me…and folks, I was hooked.

Access Denied is the story of computer whiz Erin Swift’s eighth grade year. Seventh grade, it seems, was called the Year of Humiliating Events (YOHE) because of the bad things that happened to her, but eighth grade turns out to be different. It is a delicious year of “firsts.” There is a first kiss—cute and skillfully handled by Vega, sprinkled with tongue action, and downright funny after Erin almost chokes on the guy’s chewing gum. And there’s also the first time Erin gets her period—another event handled with tact and skill. There’s even a “first” tragedy that leaves the reader a bit teary-eyed and wondering why life has to be that way.

In Access Denied, Vega creates a typical teenager’s world; a world of friendships, uncertainty, teenage rebellion, and humor. There are hilarious passages, like when Erin tosses an unused tampon to her brother Chris, and he “jumps back as if it was on fire.” And there are sad passages, like when Erin finds out a friend isn’t at all who she’s led everyone to believe she is.

I’ll say it again: Denise Vega is a wonderful story-teller, juggling humor and uncertainty and the desperate desire to fit in so skillfully, you’ll be sucked into Erin’s world before you know it. You’ll feel like you’re back in middle school, about to experience your very first kiss…if you can just figure out which way to tilt your head.