Just taking the time to alert you to a new variation of an old scam. This is actually a reprint of a series of articles I posted on another blog a couple of years ago. But to this date, people still write me and thank me for saving them thousands of dollars.

If you want to avoid the perfect scam, read on!

For all you animal lovers/breeders out there, BEWARE. There are scammers who spend all their time figuring out how to bring a great gulf between you and your money.

Since this is a lengthy story, I’m posting in three parts. Here’s Part I of THE PERFECT SCAM!

I breed Teacup Poodles. Okay, so according to the AKC, there’s no such thing as “teacup” poodles, but for the sake of argument, let’s just say there is so I can tell you what to watch out for!

I usually have a waiting list for my babies. Teacup females don’t have very many in a litter–usually no more than one or two, so it takes a long time before puppies are available.

I thought I had all my babies in my last litter placed, but a trucker who had planned to adopt was going to be on the road a few months longer than he expected. So he decided to wait for a puppy from a future litter, and I suddenly found myself with a beautiful 7-week old Teacup with no home. So, against my better judgment, I ran an ad in my local newspaper for a home for the baby. 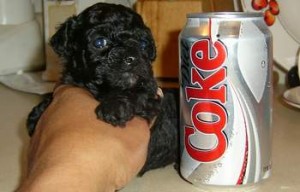 Anyway, after explaining everything, the Relay Operator coordinated our conversation, and told me the man’s name was Mike Coach, and that he had seen my ad in the paper. The only reason I’m using his name in this post is because I’m positive this ISN’T his real name!

After relaying a couple of Mike’s questions, which included how much I wanted for the puppy and how much he weighed, the Operator said Mike wanted to know if I had access to the internet so I could email a photo of the puppy. She gave me his email so we could communicate directly.

PULLING ON THE OLD HEART STRINGS

I quickly emailed a photo of the puppy to Mike. He responded immediately, asking a second time how much I wanted. Actually, I had included all that info in my ad, and Mike should have seen it when he first read it. But I was just so eager to be kind and helpful to this deaf man, I didn’t stop to wonder about anything.

In his email, Mike wrote that he and his entire family were dog lovers, and he wanted the puppy for his little son’s birthday. As I read his email, all I could do was say, “Awwwwww!” over and over again.

Mike responded again, and said he really wanted the puppy for his son. He asked if I would consider it sold to him. He then asked for my full name and address so he could send the payment in a money order or certified check.

He also asked for my telephone number. Now, I know what you’re thinking. You’re thinking this should have been a red flag for me, because Mike was supposed to be deaf and shouldn’t even need my telephone number! But I didn’t think about that; I just figured he needed my number so that if something went wrong, he could have one of his hearing family members contact me.

Boy was I wrong about that!

Anyway, Mike emailed that he was sending my asking price, plus an additional $50 for me to hold the puppy until he could get his shipper to my address to pick it up. This concerned me, because I’ve been stuck with boarding puppies before. Some buyers pay for their puppies, then don’t pick them up for a month or two. During that time, I have to feed the puppy, have it groomed, and even take it to the vet for its next set of shots. This runs up the tab, but since the buyer has already paid, they don’t want to pay anything additional–which sticks me with the tab, and…well, you get the picture.

I asked Mike what city the puppy was being shipped to, who the shipper was, etc. etc. I also told him that if he was out of state, the puppy would need a health certificate and an authorized shipping crate, which would cost more money.

He emailed back immediately and wrote that he had already figured the money for the health certificate and crate into the amount he would send me. He didn’t mention what state he was from, or who the shipper was. I emailed again and asked the same questions, and he emailed back and said he would let me know as soon as he put the money order in the mail.

To tell you the truth, I thought Mike was having problems comprehending the questions I was asking. Now that I think about it, it was pretty arrogant of me to assume that because someone is deaf, they don’t understand what you’re asking. But I truly thought he didn’t understand my questions.

So after confirming my address and telephone number, I waited for the money orders, promising to email him as soon as I received them.

WELL, THAT’S THE END OF PART I.
BE SURE TO READ THE PERFECT SCAM PART 2!

Best wishes (and no scamming),