Ted is Dead. That’s What I Said. 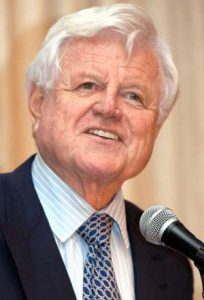 The moment I got on the web this morning, I read the sad news that Ted Kennedy died last night. By the time I made it to the beauty shop, every news station was carrying the story. Then I heard some of the women in the shop yelling to change the station, claiming no one wanted to hear a news story about Ted Kennedy.Wrong!
I wanted to hear.

Hearing that Ted Kennedy died is like hearing about the death of a close friend or a family member. Every time a newscaster spoke the words, I wanted to say, “He’s not dead, either, you dirty rotten liar!” But I couldn’t say those words, because it was true…

Ted was a hell-of-a-man, wasn’t he? And yes, I know he had a checkered past (who doesn’t, answer me that?), but he redeemed himself a hundred times over since those early days. Over the years, just hearing Ted’s name would bring a sense of comfort to me–and I suspect to other Americans as well. I can just see those video clips of him comforting Jackie Kennedy after her husband, his brother and our president, was brutally assassinated. I can see him—a little older then, comforting more Kennedys after that rowdy Kennedy cousin (I forget his name) died after skiing into a tree. And I can see him—even older…and quite a bit heavier, comforting even more Kennedys after John, Jr., his wife and her sister died in that tragic plane accident.

Ted Kennedy was a comfort and a comforter; he was a definite and necessary staple not only in American politics, but also in the personal and far more important politics of family life. He cared for America, serving our country for more than four decades…four, I tell you! Can you believe that? And who can forget how happy he was on Barack Obama’s Inauguration day; how he ignored his frail health and braved the weather so he could be there to see our country’s first African American president with his own eyes. And how he collapsed soon after the ceremony, weak from exhaustion and illness? Or how just within the last few days, he fought to be sure his issues were known and his voice was heard…knowing his time was not long. What a man.

Do you remember that look of pride and satisfaction on his face after Obama took office? That look made him feel like he was my friend; it made me want to travel to Washington, find him and give him a great big hug. Of course, I’m smart enough to know that if I had seen him, I probably couldn’t have gotten within 100 feet of him…but one can always dream.

Ah, Ted is dead, and his passing is the end of an era. That’s all there is to it.

As Americans, our hearts and prayers should…must, go out to the Kennedy family in this their hour of sorrow, because….people, Ted is dead, and who—oh, who—will comfort them now?