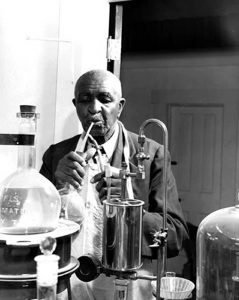 A Genus at Work

A BRIEF LOOK INSIDE DETAILED GENIUS

Did you know that ex-slave George Washington Carver was famous for far more than just “a few peanuts?” Here’s the story in a nutshell—and I’m not talking about a peanut shell!

Because George Washington Carver was a sickly slave, his poor health prevented him from working in his owners’ fields. Yet, ill health was the best thing that could have happened to him, because it afforded him the opportunity to focus on agriculture and plant life—a field in which he would eventually go down in history.

George’s owner did the unusual and sent him to school for an education. Later, after the Civil War set African Americans free, George continued his education, and was eventually summoned by Booker T. Washington to teach at Tuskegee Normal and Industrial Institute. There, George took 20 acres of hopeless land and restored its dead soil to a rich, fertile state that produced 500 pounds of cotton on each acre. George taught nearby farmers to improve their own soil, and the healthy soil yielded a healthy increase of peanuts.

But before long, the peanuts seemed to take over, and area farmers grew agitated with their rotting surplus. So George had to step in and invent uses for the peanuts, including the production of ink, facial cream, shampoo and soap.

Yes, George’s name is synonymous with the almighty goober, but his legacy was so much more than just “a few peanuts.” He developed 115 products from the sweet potato, including flour, starch and synthetic rubber. He developed more than 75 products from the pecan, and found dozens of uses for discarded corn stalks (and no, I don’t think that includes using these to make baby-doll hair!). He also created dyes and paints from common clay.

George’s work was so impressive, the United States Army used many of his products during WWI. He was invited to speak before Congress, and was solicited by Henry Ford, who worked with George to devise a way to use a plant weed to create synthetic rubber. Even the famous Thomas Edison was impressed by George’s intellectual prowess, and asked George to move to New Jersey to work at Edison Laboratories at a modest salary of $100,000 per year!

So the next time you hear the name George Washington Carver and an image of a peanut forms in your mind, think again! George was so much more. He was a genius!