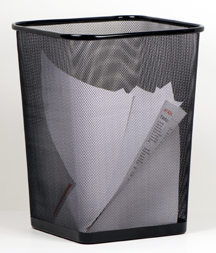 Are you sinking into the depths of depression because your book has been rejected? Do you feel like tumbling headfirst into the abyss, never to be seen (or heard from) again? Well, don’t despair! If your masterpiece has been rejected, consider yourself in good company!

So you did your homework, found the perfect publisher, and sent them your brilliant manuscript. Then you waited eight weeks (or twelve, or six months…or whatever other gut-wrenching amount of time they insisted on), only to have your manuscript hurled back at you like a giant spit wad, with a copy of a copy of a rejection that said simply and completely, “Nope.”

Well, don’t take it too hard. After all, when you think about it, being rejected puts you in the company of the very best. What do I mean? Read on, and you’ll find out:

(DISCLAIMER) The following list IS NOT my work. It originally appears on http://users.erols.com/veritas/CR.HTM, and is said to have been compiled from a book called Literary Agents, by Michael Larson.

1. The Good Earth by Pearl S. Buck was returned fourteen times, but went on to win a Pulitzer Prize.

2. Norman Mailer’s The Naked and the Dead was rejected twelve times.

3. Patrick Dennis said of his autobiographical novel Auntie Mame, “It circulated for five years through the halls of fifteen publishers and finally ended up with Vanguard Press, which, as you can see, is rather deep into the alphabet.” This illustrates why using the alphabet may be a logical but ineffective way to find the best agent or editor.

4. Twenty publishers felt that Richard Bach’s Jonathan Livingston Seagull was for the birds.

5. The first title of Catch-22 was Catch-18, but Simon and Schuster planned to publish it during the same season that Doubleday was bringing out Mila 18 by Leon Uris. When Doubleday complained, Joseph Heller changed the title. Why 22? Because Simon and Schuster was the 22nd publisher to read it. Catch-22 has become part of the language and has sold more than 10 million copies.

6. Mary Higgins Clark was rejected forty times before selling her first story. One editor wrote: “Your story is light, slight, and trite.” More than 30 million copies of her books are now in print.

7. Before he wrote Roots, Alex Haley had received 200 rejections.

8. Robert Persig’s classic, Zen and the Art of Motorcycle Maintenance, couldn’t get started at 121 houses.

9. John Grisham’s first novel, A Time to Kill, was declined by fifteen publishers and some thirty agents. His novels have more than 60 million copies in print.

10. Thirty-three publishers couldn’t digest Chicken Soup for the Soul, compiled by Jack Canfield and Mark Victor Hansen, before it became a huge best-seller and spawned a series.

11. The Baltimore Sun hailed Naked in Deccan as “a classic” after it had been rejected over seven years by 375 publishers.

12. Zelda wouldn’t marry F. Scott Fitzgerald until he sold a story. He papered his bedroom walls with rejection slips before he won her hand.

13. Dr. Seuss’s first book was rejected twenty-four times. The sales of his children’s books have soared to 100 million.